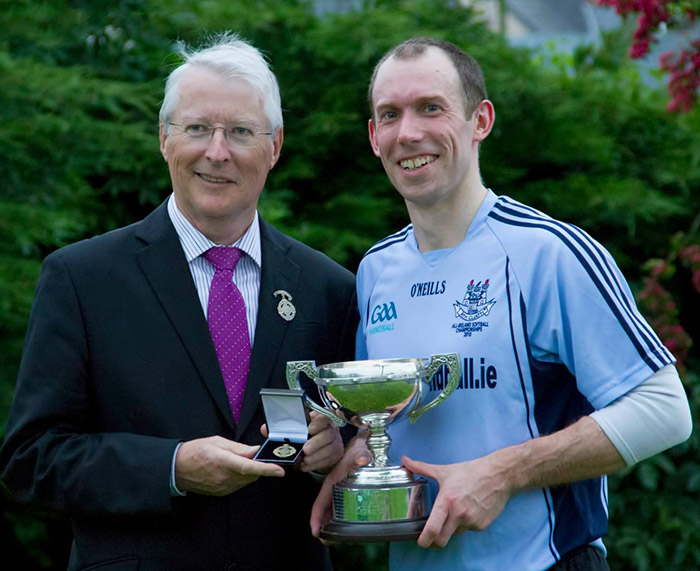 St Brigid’s Kennedy had previously established a winning partnership with Egin Jensen (Na Fianna) but on Jensen’s retirement in 2011 a fallow period followed and while Kennedy continued to excel in singles his successful doubles career seemed to have come to a halt. This all changed following the transfer of Carl Browne to Dublin. They began playing together in 2014 and that year, showed their compatibility, by winning the inaugural 60x30 Nationals weekend tournament. It was in 2015 however that their all-conquering championship run began, culminating in Saturday’s victory in the third leg of the Triple Crown of All-Ireland Senior Doubles titles.

The winning sequence began in October 2015 when they defeated Kilkenny’s Neary and Walsh in a three game 60x30 softball final at Abbeylara, to establish their credentials as All-Ireland senior doubles winners. In March this year they played outstanding 40x20 handball to defeat the multiple champions and strong favourites, Paul Brady and Michael Finnegan of Cavan, at the O’Loughlin’s club in Kilkenny. This again proved a three game thriller with Dublin winning the first but conceding the second to set up a third game decider. The St Brigid’s players made no mistake winning the third 21-13 for a very well deserved victory.

Following a three game semi-final win over Kerry’s Dominic Lynch and John Joe Quirk at Ballina two weekends ago, they played Limerick’s finest on Saturday, winning in two games in the traditional hardball code. In both games they had to come from behind. In the first, Limerick started strong and led 6-4 before building a substantial 14-7 lead with some excellent serving by Murphy and exquisite kills by Fitzpatrick with both left and right hands. The experience of the Dublin pair showed in their coolness under pressure. Some terrific long distance killing by Kennedy and diving picks by Browne negated the Limerick pair’s efforts and the St Brigid’s players gradually eat away at the Limerick lead to bring the score to16-10 and then 16-13 before Limerick again got in to serve. Dublin managed to take them out for no ace and tied the game at 16 all. This was all they needed as they ran out the first game 21-16.

The momentum shift carried into the second game with Dublin running up seven aces in a row with some superb serving and flat killing by Browne on the right. Again the ebb and flow of the match continued with Limerick fighting back to forge ahead at 9-7 and, after some further exchange of hands, they established what seemed a fairly comfortable lead of 13-7. At this crucial stage of the match however, the Dublin pair again tightened up their play and after some breath-taking rallies with all four players making great gets and executing spectacular kills they tied the game at 13 all. They then continued their dominance to lead 19-13 before Limerick again fought back to within two aces at 19-17. This proved their final effort and Dublin ran out winners 21-16, 21-17.

In winning their outstanding treble of gold medals the Dublin pair have underlined their expertise in all three codes of handball and are only the second doubles pair in history to achieve this triple crown of successes. They now head into the softball season and will aim to retain their championship title come next October. If they manage to do so they will be the first to hold all three titles in the same calendar year. Whatever happens, the St Brigid’s players have already made their reputation as the outstanding doubles pair for 2014/2015. We wish them well in the future.

Posted by realboyle.com at 1:01 AM No comments: