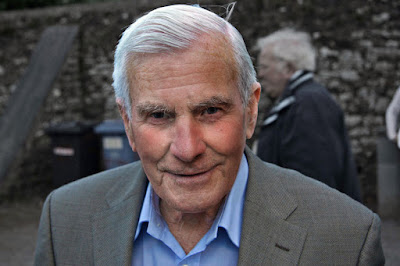 (Published in the 1998 Roscommon G.A.A. Annual. For the most part it is in his own words)

“Old soldiers never die they just fade away”, was most famously quoted by the U.S. General Douglas McArthur on his retirement.

John Joe Nerney, now at the venerable age of 77 and a former soldier of ‘The Emergency’ in the forties has little intention of fading away as the sprightly bouncy step belies his years. Even now John Joe has been going through his paces as he jogs the roads of Boyle or does his circuits of the Abbey Park. He completed half a dozen marathons including the early Dublin City ones his last being in 1988.

It is however as part of the great Roscommon team of the 40s’ that John Joe is constantly associated. He has no hesitation in confirming that widely held belief that it was one of the greatest sides ever in Gaelic football. We will let him tell his story.

“There were powerful men on that team, Jackson, Lynch, Callaghan, Carlos, Gilmartin, Hoare, Kinlough and Boland, a great man. There was not a weak link. They kinda carried me! Jamesie was a great player and a great captain. They were all great.

If you looked back down the field and saw the power of the half back line of Lynch, Carlos, Felim Murray or Owensie Hoare you would get great confidence and then Gilmartin and Boland were never beaten. I passed a lot, especially to Keenan, he was the scorer-in-chief. Up front you had McQuillan battling, in every sense of the word, with Keohane of Kerry. They were both army men then. Kinlough was a great player. He did not train much but he got the goals.

I came on in Boyle in the ’44 Connacht Championship replay and got a great reception from the locals. We should have won any number of All-Irelands with those teams. After the ’43 and ’44 double we were caught on the hop in ’45 by Mayo but I feel we were at our peak in ’46. The late goals gave Kerry a draw in the final were heartbreaking. They were great games though and Kerry were great sports, win or lose.

In ’47 we might have got to New York for the Polo Grounds final but Cavan just beat us in eh semi-final. They took off Tom Collins and Cavan’s Tony Tighe played hell after that.

Mayo came with a great team then but we shocked them in ’52 and should have beaten Meath in the semi-final. O’Malley, Eamon Donoghue and Frank Kelly were there and Boland was as strong as ever. We did not have any luck in ’53 either in the semi-final against Armagh. Boland and myself finished playing County in ’54. We had a good run. I got on for a while for Connacht against Leinster in the ’53 Railway Cup, when it meant something. I also played centre field a few times and once at wing back where I marked Frank Stockwell of Galway. I did alright!

At Club level I played with Boyle. We had some good battles especially with St. Michaels. Fuerty beat us in a county junior final. We had a tough couple of games with Eoghan Ruadhs, of Roscommon town, in Castlerea. It’s history now. I remember I was pleased with scoring a goal from a free against Strokestown in a game. Tom Shevlin was annoyed. The great Boyle clubmen then were Martin Regan, Mickey Morris, Joe Sheehan, Peter Phelan and Jimmy Sheeran among others.
We won county minor championships in ’38 and ’39 and I was a sub on the Roscommon All-Ireland minor winning team of ’39. Oddly my memory of that is hazy.

I played as long as I could for Boyle because I was fit and I enjoyed playing (John Joe played well into his fifties). I got great satisfaction training Eastern Harps when they won the ’75 Sligo, Championship.

We did not hear much back then of hamstrings and such. They might have been something to do with fiddles for all we knew. All we seemed to get were sore knees. We worked hard, walked or cycled most places so that helped. Wintergreen was our rub. The football was tough but fair. It’s faster now but we had our tactics too, the famous L.T.B.L. (keep the ball low) during one of our collective training periods in the old Infirmary (now the County Library). We had great comradeship. We are still friends and meet from time to time. I enjoyed ’91 when we were the team saluted in Croke Park. We have been well treated down the years”.

I ask how he feels talking to reporters about those times; “I don’t say much just send them to Jimmy Murray. He is still the Captain and spokesman, a great ambassador for the team. We all looked up to him and it hasn't changed. A couple of years ago I was invited down to Killarney’s Legion club where I met my marker from ’46 Dinny Lynne. We are both President’s of our clubs. Some other great times were had when Boyle went to Birmingham, London and Manchester. I remember playing with Roscommon, in Mitcham I think, London. Boland and I missed the return train for some reason! A lot of games were played for church building funds and we helped build a good few churches then! One of them was a great game, in late ‘45 for the Pro-Cathedral against the ’45 All-Ireland winners Cork. We won that one. Jack Lynch would have been playing for Cork. We had another big one against Kerry for the Liam Gilmartin fund in ’46. I think that was Gerry O’Malley’s first game for Roscommon. I don’t know why he wasn’t there in ’47. Maybe we’d have been in the Polo Grounds if he was! Did I mention Harry Connor and Paddy Kenny from Ballinameen and Doctor Gibbons?”

John Joe was born in Croghan on April 1st (a cause of amusement) 1922 and on the death of his father the family moved to Ballinameen and then to Boyle. He attended Boyle National School to masters Kennedy, Jordan and Mannion. After school he worked at a variety of jobs such as the County Council and ‘The Railway’. He joined the army in 1943 during The Emergency’ and won the ‘Army Chaplains Cup’ competition while in Athlone. After the army he joined the Post Office where he remained for over forty years clocking up the miles. He married Agnes Lane in 1958. They have a family of two girls Mary and Theresa and three boys, Gerry, Anthony and Raymond. Gerry and Raymond played county minor for Roscommon.

John Joe is a modest man who does not like to push his own contribution and from time to time says, ‘don’t print that they might think I’m bragging’. However he is not one to let the side down either and I often think, though I’ve talked to him quite a few times, that there is a tinge of devilment somewhere and that I have failed to get past his defences. The games are still being played as he steps jauntily away with a twinkle in his eyes.

In any event we of Boyle had our representative, our football hero, in that team of football heroes. John Joe would not want that accolade but he is a constant reminder that one of our own strode Croke Park with the very best. 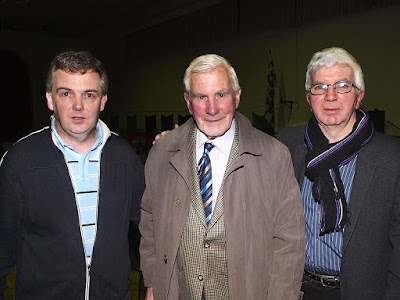 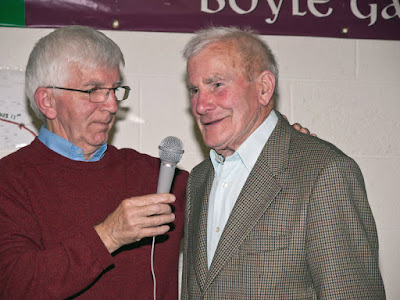 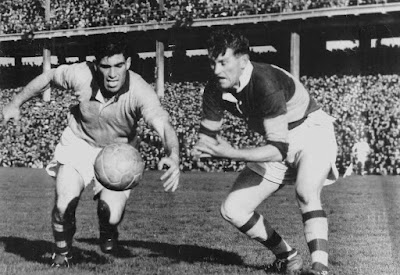 Posted by realboyle.com at 9:41 PM